Rock climbing… My first encounter with someone who was into rock climbing was early last year at Nile River Explorers, Brian had the most calloused hands I’ve ever shaken; they felt like uneven wood. Because I was so curious, I asked him why. He told me about rock climbing; a pastime where participants climb up, down or across a rock with the aim of reaching the end point of a (usually) predefined route without falling. My new acquitance also looked pretty banged up; swollen ankle, bruised elbow, scraped shoulder and I wanted to know if he had gotten all that from rock climbing. Apparently, he had been in a kayaking accident, his kayak hit a rock, he fell out and hit the rock. It was also my first time to hear about kayaking. I remember thinking to myself; White folks, always on some death-wish of some sort or the other. I shrugged it off and didn’t think much of it afterwards. 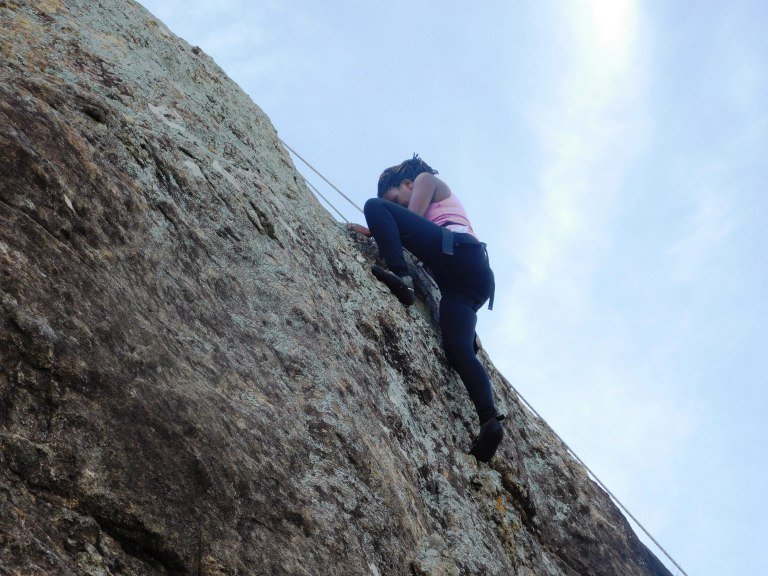 Olive on the rock

It wasn’t until late last year when my workmate pointed out that I lived in a bubble; my life revolved around the office, Alliance Française de Kampala where I go for French classes, the trail I run most evenings in Lubowa – one of Kampala’s suburbs and Kyaninga Lodge, an exquisite five star lodge in Fort Portal, Western Uganda. It didn’t matter to him that I’ve only stayed at Kyaninga Lodge one weekend. But it was at this point that I realized I needed a new hobby and rock climbing came to mind.

A quick search took me to MCU – Mountain Club of Uganda – founded in 1945! A group about developing adventures in Uganda. It turned out that they have an indoor climb every Tuesday night at the International School of Uganda in Lubowa along Entebbe road and my running trail. I could easily see how this would work out; a10k run AND a climb!

That Tuesday, I went for my run prepared to go register for membership, fifty thousand Ugandan shillings only (paid annually) and to finally explore this rock climbing thing afterwards. Climbing starts at 7pm, I arrived a few minutes past and I stood by trying not to look too lost as I watched them getting their gear ready; fastening their harnesses and lacing up their climbing shoes.

“First time?” Someone had walked up to me.

“That obvious?” I asked.

“Pretty much. Have you already climbed?” he asked as he gestured at my sweaty self.

“Great warm up. Well, welcome to MCU. I can show you around if you want…”

He took me to a pile of climbing shoes and harnesses and as I sat down besides a heap of shoes trying to find my size, I started to feel alive. The idea of actually getting around to doing something new with a bunch of new people was exhilarating!

My new person excused himself to go climb and someone else took over to show me how to wear a harness. It’s somehow tricky and it involved him getting really close to me to tighten it around my waist and my thighs. I mentally kicked myself for stupidly going for a run and allowing myself to sweat. I tried to sniff the area in my space to make sure I didn’t stink like a goat…

“I’m sorry, I’m not too fresh. I ran 10k before I came here,”I apologized in case I stunk like a goat.

He smiled, “I noticed. I guess it explains a few things…”

“You feel… Fit.  Well, I think you’re good to go. Do you feel snug enough?” he asked. I filed the compliment away with a smile and thought, I just might really enjoy this rock climbing thing after all…

“Would you like to watch me climb and maybe you can give it a try?” he asked me. I nodded. 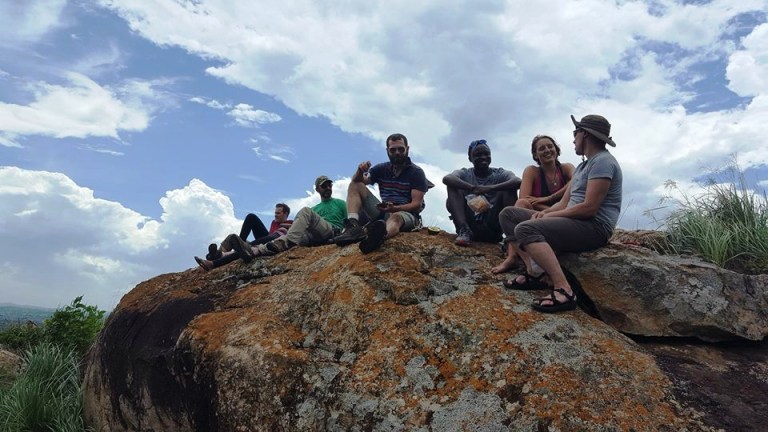 We walked over to someone with a rope and he explained to me that he would be his belayer; someone that exerts tension on a climbing rope so that the climber does not fall (very far) and he showed me how to tie a belay knot.

When he climbed, it looked pretty easy, until it was my turn.

I ended up using muscles I had no idea existed in my body. Lifting oneself upwards using ones thigh and forearm strength was rather something else. Not to mention having to trust my belayer to not let me fall to my death.

The calories you burn, the aches you feel the following day, it’s no wonder so many people are taking on rock climbing as an alternative to frequenting the gym; it’s a total body workout!

I’m aware that I’ve been going on and on about rock climbing when in fact that was wall climbing. The outdoor rock climbing itself is quite different and I got to experience it first hand a few weekends ago. Nicky, a club committee member organized an overnight trip at “Luwazi”, which translates to “rock” in my mother-tongue. It’s located in Kalaji, one of the villages in Gayaza, Central Uganda; an hour’s drive from Kampala city. 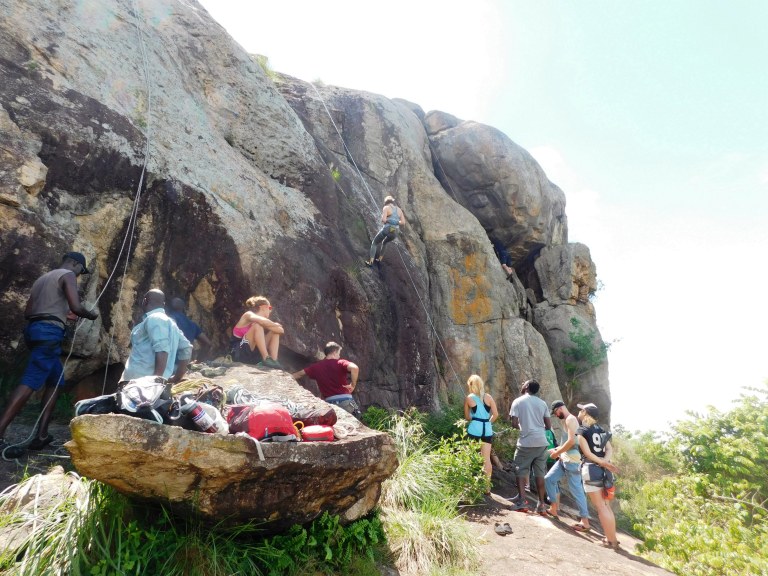 First of all, I kept telling everyone I was waiting in line to climb but every time my turn came, I suddenly became busy; asking someone, anyone if they needed water, a fruit or something so I could go fetch it for them. It wasn’t until late afternoon that Matt, the Club President noticed that I was probably scared. He suggested “setting up lead” for me, I followed him. (I’m still a newbie, I don’t understand the lingo just yet)

At a previous Luwazi trip, Matt had suffered a really bad fall and everyone was still talking about it. It had me thinking – if a pro like him could fall, what would become of me? Maybe this rock climbing thing is just too dangerous for my simple life? I imagined my death; a blood splatter, my friends telling my mother that I died while I was attempting to climb a rock. My poor mother would ask them why I had been climbing a rock in the first place…

Anyways, trust the guys to talk me positively; complimenting the view from the top and how it isn’t that hard at all and that I had to earn that night’s dinner; the aforementioned Caribbean jerk chicken. I didn’t need much persuasion after that.

Up I climbed; second-guessing my strength and ability to carry myself upward, questioning my belayer’s ability to have my back if I lost my grip. Soon, I decided to start think positively… Confidence seeped through my muscles and it started to show in my climb. They were right, the view is surely to die for but not in that sense.

I eventually reached the end point, triumphantly if I may add but  trouble returned because I had to descend. I was asked to lean back, put all my weight onto the rope and descend.

“No way! This is how Bruce Wayne broke his back!” I screamed.

They laughed. One of the guys screamed back (we had to scream because it was windy and the rock is high) “You won’t fall. We’ve got you! Plus it’s almost dinner time!”

Hugo, one of the pros had climbed to the top and he walked towards me, “What’s up Olive?”

My heart drumming against my chest, “Nothing much…”

“But it’s getting late…” My brain was receiving too much blood at that moment to register what he connected to my what so I could feel secure and he gestured to my belayer to take me down whether I was ready or not. Looking back, I realize it would have taken hours. Yet everyone was doing their best to be patient with me.

I received high fives at my first “successful” outdoor climb. My heart sang pride songs and it didn’t take long before I climbed again and again and I didn’t need someone to talk me down! We only stopped because it was too dark and it was really Caribbean jerk chicken time.

We got served, sat around the bonfire, ate, swapped stories and made new friends… We talked till people decided to retire to their tents one at a time. 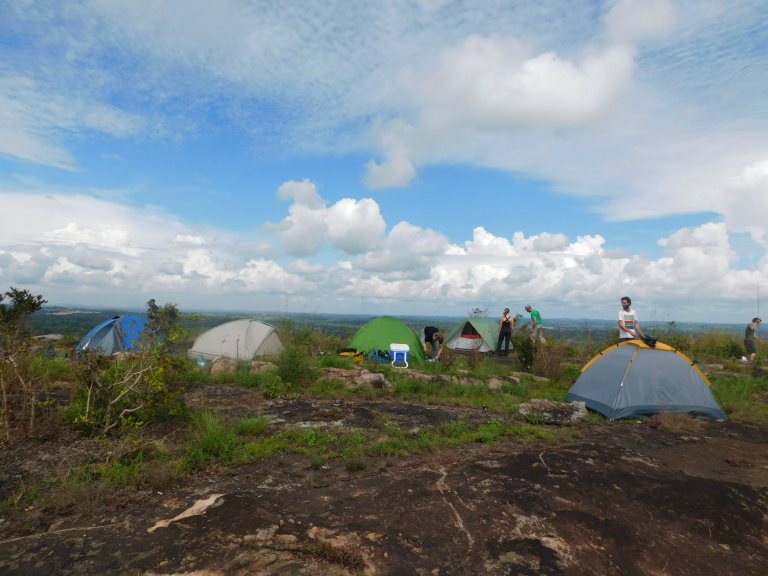 That night, I slept like a log, I doubt I even turned; it was one of my best night’s sleep – on a hard rock.

We woke up to a breakfast of cornmeal porridge, fried dumplings, eggs, fried plantain and toast. We climbed a few more times and prepared to return to the city.

A fun outdoorsy weekend just under an hour out of the city! Trips such as these are free for paid up MCU members and the only expenses you incur are your meals, renting climbing shoes, harnesses, a shared rope and perhaps fuel during carpooling.

I’ve learnt that the only way to start doing things out of ones comfort zone is by a joining a group of people already doing these things. MCU is big on climbing, hiking and kayaking. I’m yet to take my first kayaking lesson and when I do, you will know.